The UK Premiere Screening at JW3 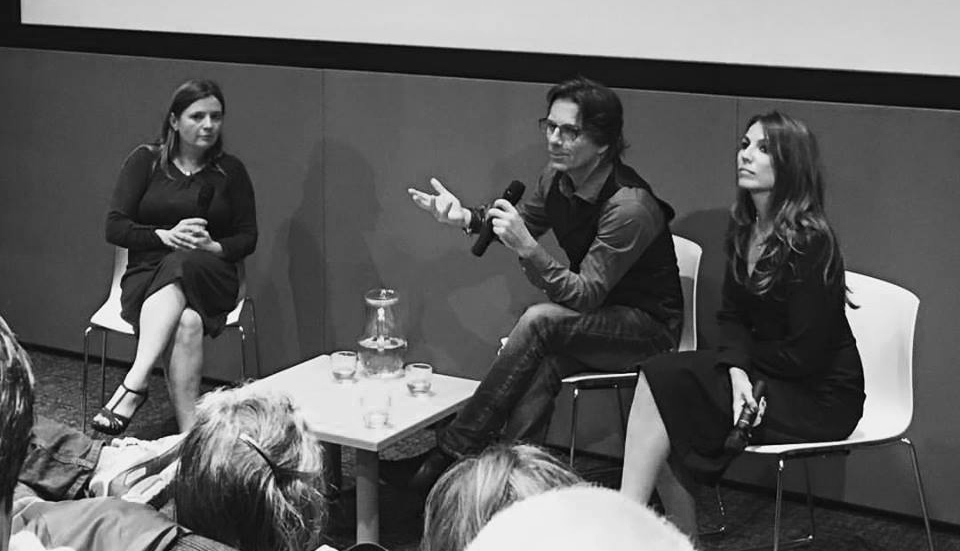 On Monday 11 July 2o16 the feature length version of Rebel Of The Keys was screened for the first time. There was a great buzz of excitement at JW3 as many of those who had been involved in the making of the documentary came together to see it for the first time.

The location of the screening in the cinema at London’s Jewish Community felt very fitting and, because it was a sell out, JW3 have confirmed they will be screening it again later on this year.

Here are some extracts from the Q&A that followed, with musicologist Dr Anastasia Belina-Johnson and the film’s director Mark Charles on the panel:

How did you overcome the challenge that there is not a lot of archive footage of André?

MARK:  We tried to create a balance between talking heads, stock footage and re-enactments – not overdo reenactments, not overdo stock footage so we still engage with the people that care about him. I think that was important because he affected so many people and we wanted to show that. But yes, it’s frustrating not being able to see as much of him as, say, someone like Glenn Gould where there’s a treasure trove of footage.

Early on into making the documentary we found out the amazing news that the opera was going to be performed, can you tell us the story of how this came about?

ANASTASIA: When we were looking at the diaries there were some very poignant entries about the first play-through and André’s disappointment that it didn’t make it to the season at the ENO. Reading about David Pountney being one of the “culprits” as it were, and then having David look at the score again he sort of actually felt a moral responsibility to put the wrong the he did right. So it was unexpected for all of us – for David to say, “we are going to do this opera” is a better outcome than we could have hoped for.

What difference did it make to you Mark as the director of the documentary?

MARK:  incorporating the opera story helped because it juxtaposed his narrative and created a present day narrative to help break up the scarcity of archive footage we had. It gave a little bit of his voice, I like to think it was him speaking in a sense. With the opera you just have to experience it, a bit like jazz. If you see it live it’s a beautiful production, simple, it’s elegant and it says a lot. The director, Keith Warner, was very perceptive and astute and understood how to give it life and it correlates with a lot of political things that are happening now and it feels quite present.

The opera was a great success, but none of us actually knew if it was going to be any good. Can  you tell us about the play-through?

ANASTASIA:  It was interesting to see the score for the first time but of course it was quite difficult to “hear” it and having the play-through was very interesting and useful. It was immediately obvious however looking at the libretto and how the dramatic action unfolded, that it was a very good work dramatically speaking and I remember the question I posed to David Pountney, “what would make you accept this opera into production?”, and he told me, “well it has to be a good work”, and it is more than that, it really is a masterpiece. Everybody who sees it agrees that for somebody to write their first opera with very little experience of orchestral writing and vocal writing at this scale, it’s just incredible. And going through the rehearsal process and then finally hearing it with an orchestra just opens up another world. And I want to add that the opera really is direct, it speaks to you very openly and directly. It’s not an opera that you really have to struggle to understand, it’s just there to be experienced.

MARK: I think also because we’re at JW3 it would be relevant to talk about the Jewish aspect. For me, at that point I learnt about my Austrian Jewish heritage that I didn’t know of. I thought I was just Austrian, I didn’t know the other bit. So I was traveling in Warsaw and finding out about André’s story and you realise the weight of everything. You wonder how different André might have been? We will never know but it affected everything for him, the way he was with people, his relationships, his music. His music would probably not have been the same. He was broken in many ways, always trying to fix himself. I think sadly he was just starting to mend himself just before he died. You can see just how those things shape people and shape us, and that was, for me, quite profound.

Anastasia, on that journey of discovery, was there anything in particular that felt profound for you?

ANASTASIA: Learning about human history, learning about this one experience was significant and the poignancy of André’s life and actually the loneliness of his life, and it is very beautifully reflected in his opera. It is about many things but it is very much about loneliness and of being alone in life and society. Yes, that’s the lesson I learnt from this experience.

3 thoughts on “The UK Premiere Screening at JW3”