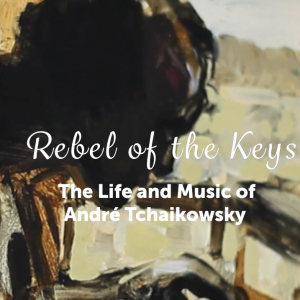 Trailer for Rebel of the Keys

Rebel of the Keys charts the life and times of pianist, composer and ‘enfant-terrible’ Andre Tchaikowsky, mixed with a present day journey to the first performance of Andre’s opera on the international stage.

Anastasia Belina is a musicologist who has become fascinated by Andre’s life. She takes us on a present day search for Andre’s story. In the process more of Andre’s music is uncovered and played. It was Andre’s dying wish that his opera adaptation of ‘The Merchant of Venice’ would one day be performed and as this now becomes a prospect, Anastasia follows the journey from first rehearsal to its world premiere in Austria.

Andre was so naturally gifted as a pianist that he eventually performed on the world stage with Arthur Rubinstein. Yet with great fame before him, he rebelled against what he saw as the ‘superficial and humourless elite’ of the American classical music scene, and found himself touring other parts of the World, all but exiled from his career in America.

Blessed with an extraordinary intellect, Andre was regarded as a true musicians’s musician. His music also hints at his capricious character. In his recently published and very revealing diaries, we learn of his great struggle with depression, and recurring nightmares, rooted in his tragic experience in the second world war. Andre had an ‘Anne Frank’ like existence, escaping the Warsaw Ghetto and hiding out during the rest of the war, hardly ever seeing daylight.. He lost his Mother and other members of his family to the holocaust.

Yet Andre would rather be thought of as the ‘dangerous dinner guest’ than the man with a tragic backstory. Andre also endured many doomed love affairs, was openly homosexual in much less approving times, yet, forever contrary, still hoped that a woman would be the ‘saving of him’. He continued a passionate exchange of letters with the Polish writer, Halinka Janowska. Halinka always hoped they would one day be together, and Andre even fantasised about the idea himself. But with Andre, reality was a far more daunting scenario than the whims and fancies of his imagination.

His rare gift for piano, composition and prose, made Andre a genius. His unconventional life and wry sense of humour made him unforgettable. The bequeathment of his skull to the Royal Shakespeare Company to be one day used as Yorick in ‘Hamlet’, is just one of many extraordinary tales of Andre, that will make him a talking point for generations to come.

The complexity of Andre’s music and some hitherto surprising and unknown events in his life, as well as the sight of his masterful opera on the world stage, all lead to an ending that would please this contrary but fascinating individual.

The documentary has been produced by EntertainingTV and Culture.pl